As a roller skating club that still exists today, Wheeling Lampung has a lot of enthusiasts. The founder of Suci Aprodity said that the enthusiasm of the Lampung people towards roller skating is indeed quite good. Many of them make this Dutch sport a hobby and even pursue it as a professional. Wheeling members themselves even touched the number 100 people. However, that number then shrank due to natural selection. Currently, the number of Wheeling Lampung members has reached 50 people, with a total of around 35 active members. They usually practice twice a week on the Saburai field or at the futsal venue on Saturday afternoons and Sunday mornings.

There is no age limit to join membership in Wheeling. Most importantly, the person concerned is considered to be able to focus and carry himself well. Because, as a paid club, the coaches at Wheeling have a moral burden to train their members to be smart.

"There are children who are 3 years old who want to join, wanting to be rejected doesn't feel good, because he is very excited, but it's hard to tell," he told Tribunlampungwiki.com, Wednesday (18/3/2020) The same thing happened to adults. Most of them already have other activities which eventually become unfocused.

Therefore, Wheeling Lampung agreed on the age level that is usually a priority and can focus on when training is 6 to 12 years. "That is the age of kindergarten to sixth grade elementary school children, because when they are already in junior high school, high school, or college, there are many other activities," he said.

Tribunners who wish to join Wheeling Lampung membership can attend immediately when they are training. Suci added, for those who do not have roller skates, they will borrow it for some time, while those who do, can come directly to Saburai Field on Saturday afternoons and Sunday mornings.

Wheeling Lampung The Winner Inlineskate - U43 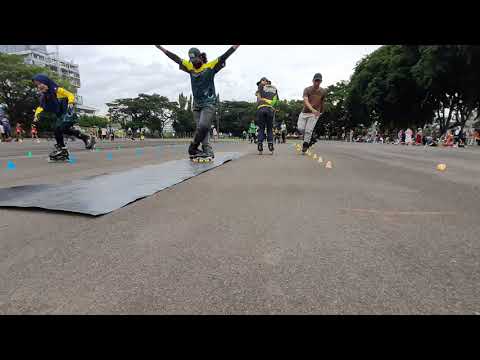